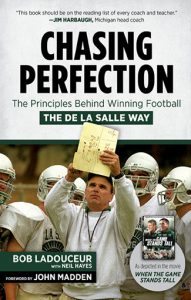 Bob Ladouceur and I are thrilled to announce the completion of our latest project. Chasing Perfection: The Principles Behind Winning Football the De La Salle Way by Bob Ladouceur with Neil Hayes (Triumph, 2015) is now available at on-line booksellers and will soon be in bookstores.

The 272-page book, which has a $24.95 cover price, contains everything Ladouceur learned during a 33-year coaching career at De La Salle High School in Concord, California. Ladouceur had no coaching experience in 1979 when he took over a De La Salle program that had never had a winning season. He retired after the 2013 season with an astounding 399-25-3 career record featuring more undefeated seasons (28) than individual losses and a 151-game winning streak from 1992-2004 that more than doubled the previous national record.

“The release of the book When the Game Stands Tall brought a lot of attention to our program, and the movie by the same name brought more,” Ladouceur wrote in the introduction. “We already field hundreds of e-mails every year asking how we motivate players, how we run our offseason conditioning program, and how our offensive line gets off the ball so quickly. I’ve done my best to explain it all here.”

“We often think of football as a complicated game,” Hall of Fame coach and broadcaster John Madden wrote in the forward. “If there’s one thing to take from this book it’s that it doesn’t have to be. There’s nothing complex about how Bob Ladouceur teaches the game. His genius is his ability to reduce the game to its essence.”

In a game where playbooks and game plans are top secret, it’s rare for a coach to divulge every detail that has resulted in a program’s success. That’s why Madden calls Ladouceur’s and Hayes’ work, “A treasure.”

“This book is an incredible, time-tested blueprint for aspiring coaches and is a great contribution to the coaching profession,” Madden wrote. “It should be required reading for anybody who wants to coach football — or any sport — for that matter. His valuable lessons about leadership, motivation, commitment, accountability, integrity, hard work and teamwork will also resonate in the business world.”